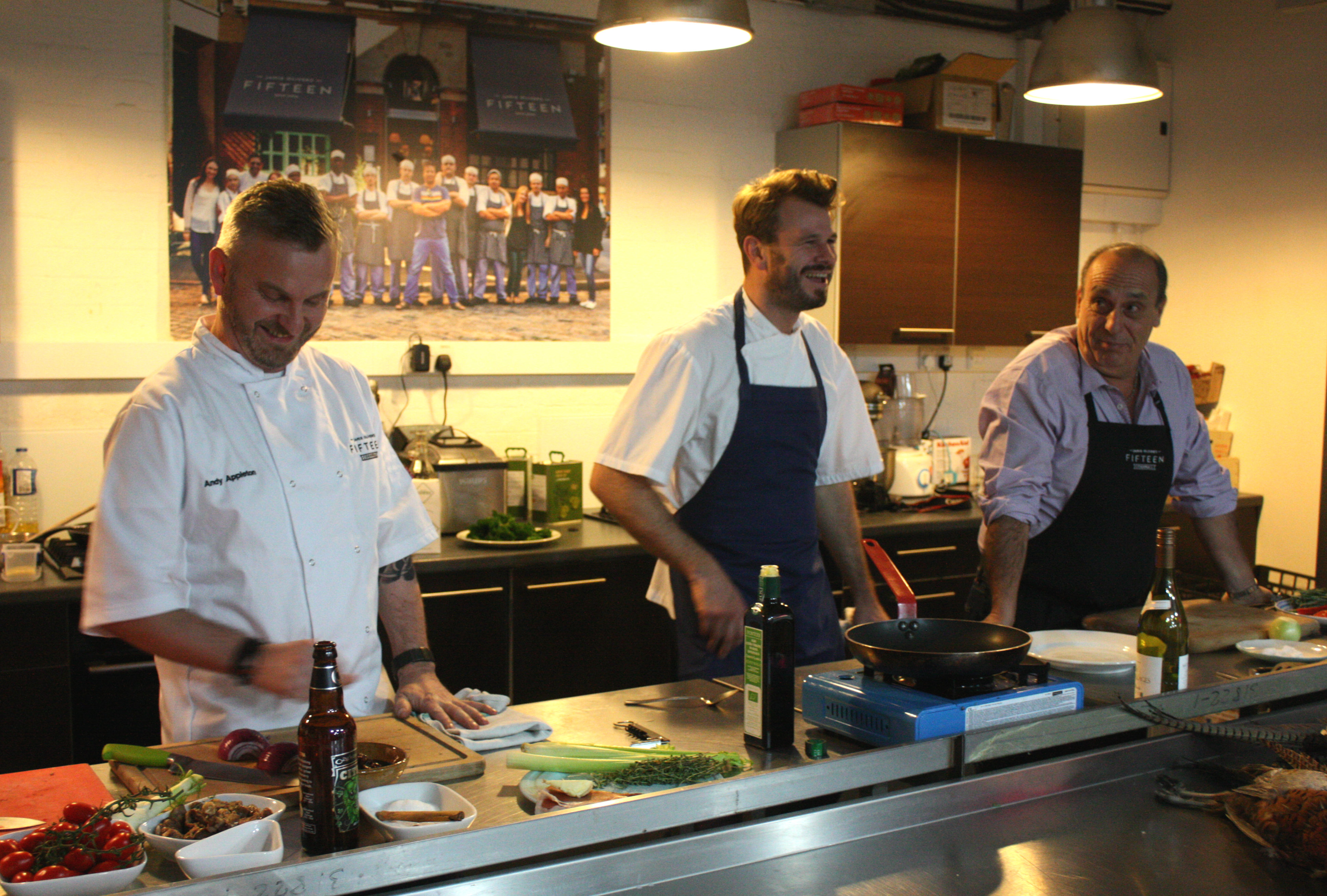 “The sport might-a be expensive, but the game is cheap! Five-a pounds for a brace of pheasant, you can’t-a get a chicken for that!” shouts  Italian chef Gennaro Contaldo, long-time mentor of Jamie Oliver and third-generation “hunter” of pheasants.

I am near Old Street, at the Fifteen cooking school. As part of a push to get more people talking about game, Team Jamie are hosting a pheasant-cooking evening for food bloggers. I feel like a fraud - only because my attendance means they’re preaching to the converted. I need no persuasion.

Those of you kind enough to follow my blog will know that I live with two boys who, around this time of year, start disappearing at weekends and returning to London with bagfuls of pheasants. Some are eaten immediately, some get hung off the balcony, and many get put in the freezer to be rediscovered and defrosted at odd times of the year (see my mid-August recipe for Pheasant Basquaise).

I cook pheasant more often than most, but I am always on the lookout for good, new pheasant recipes. Because pheasant isn’t readily available in supermarkets, it doesn’t get even almost as much attention as most other meats. Most pheasant recipes are stuck in the eighties. The bird is drowned in a thick brown sauce - overwhelmed by cream and brandy and cracked black pepper.

“You either cook it for a long time, or a quick time, so it is still a little a-bleeding” Contaldo shouts. He shouts everything. Not in an angry, Ramsay-like way, but just as a passionate Italian. Those of you who have seen him on television will be pleased to know that it’s not just an act for the camera. Lots of arm waving and emotion. “Look at this meat, look how tender. You can-a eat it raw” he says, squeezing the deep red pheasant meat between his fingers and bringing it up to his mouth.

The dish Contaldo is making is pan fried pheasant with patate arraganate. It is so clever, and so easy and so tasty.

Firstly, he makes the arraganate - a little gratin. “This will feed-a two people, but for me just one.” he grins, as he thinly slices three charlotte potatoes. He coats them in olive oil, salt and a generous sprinkle of oregano - and arranges a layer in a small earthenware dish.

Next, Contaldo takes a handful of halved, baby plum tomatoes, and uses his thumb to scoop out the seeds before loosely squashing them and throwing four or five on top of the potatoes.

“Because I-a don’t want it too wet and too sweet!” he bellows, as if repulsed by the thought - but all the time a twinkle in his eye. Next another layer of potatoes, and then a few thinly-sliced circles of onions. “But not too many!” yells Contaldo. “I don’t want it to taste too much of onion!” With a final flourish of some basil leaves, it goes in the oven. 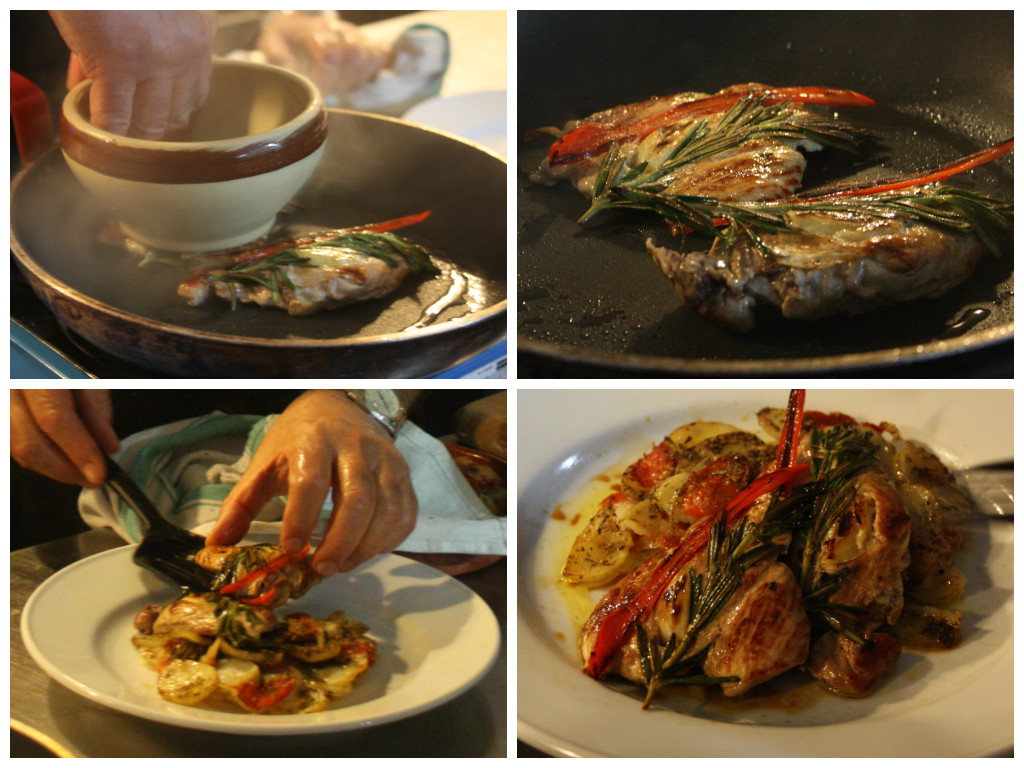 Now, Contaldo moves onto the pheasant. “The frying pan must be hot” he stresses, his fingers dancing across the pan, feeling its temperature. “It needs to seal the pheasant. If the pan isn’t hot enough then it will cook the bird instead, and the meat will start to shrink.”

While the pan is coming up to temperature, Contaldo uses the heel of his hand to pound the two pheasant breasts on the board in front of him - until he’s satisfied they’re sufficiently tender. He then takes a sprig of rosemary, half a red chilli and a piece of garlic, and pounds them into the now flattened pheasant breast.

The meat has just started sizzling in the oil-coated pan. Contaldo picks up a small earthenware dish, and starts pressing down on the pheasant breasts - really pushing them hard onto the heat of the pan, and embedding the herbs into the meat. 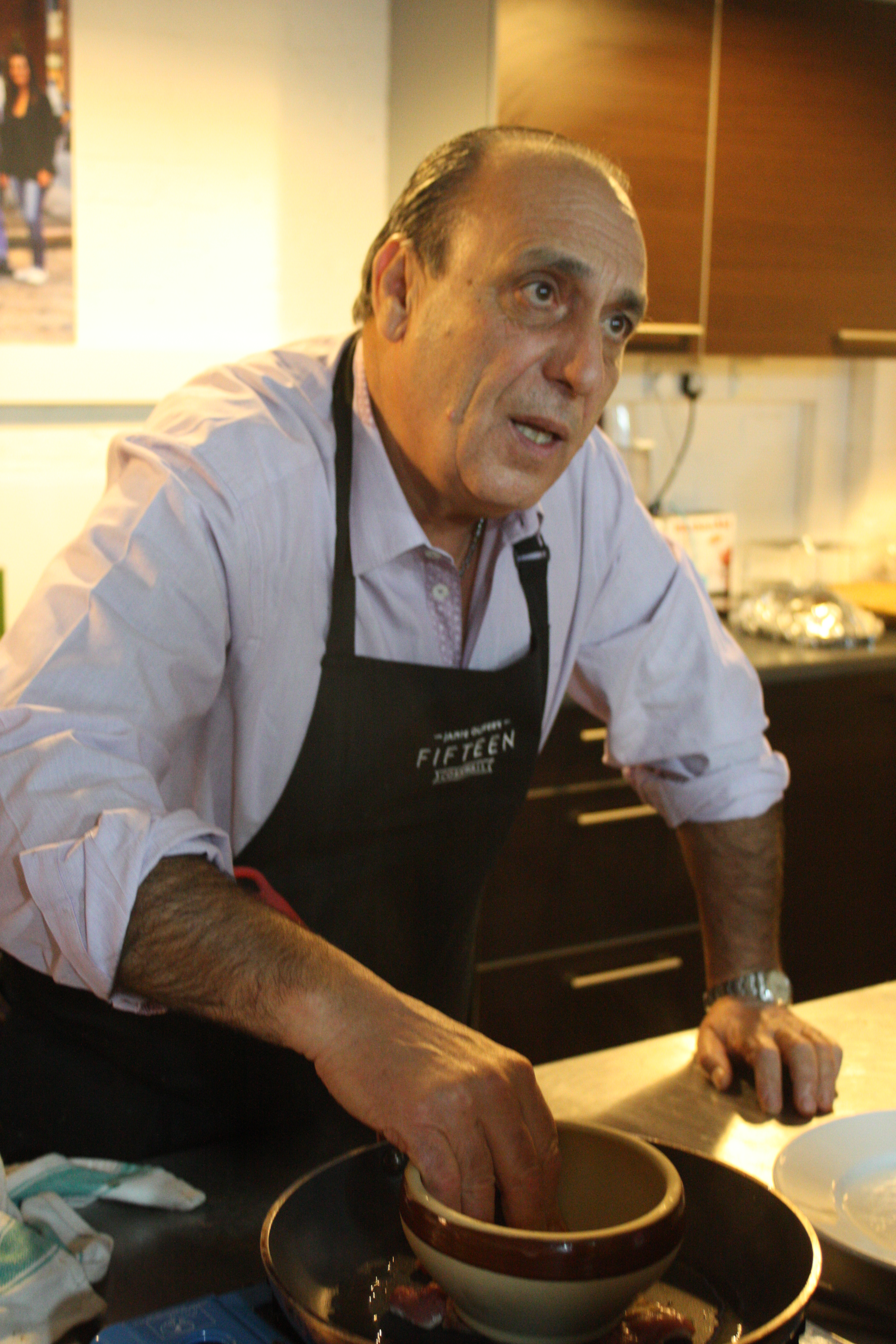 “When you’re pressing down on the meat, should you always use a ceramic bowl?” a blogger asks.

“I should-a say that the flavour of the ceramic enhances the flavour of the-a pheasant breast” Contaldo laughs. “But no, I just-a use the ceramic bowl because it was on the bench next to me.” He assures us that anything will work for this rustic technique - a mug, a weight, a smaller pan.

Contaldo takes the arraganate out of the oven and puts half on a serving plate, with the pheasant breast on top. He deglazes the pan with a glass of white wine, and the air fills with chilli-rosemary aromas. He pours the jus over the pheasant breast, and proudly serves the best-looking pheasant dish I have ever come across, cooked in no more than 20 minutes.

The second  chef to step up is Jon Rotheram, head chef at Fifteen London. His dish centres round a pheasant sausage he’s developed which contains 60% pheasant and 40% pork. His dish is a twist on a classic - as the sausage is served alongside pheasant breast, game chips and lashings of bread sauce, but also beautiful pickled quince, slow-cooked onion and pan-fried kale. A dish of dreams.

I’m not going to talk you through the recipe - I don’t have a sausage maker - and I doubt many of you do. But I do want to run you through a few things which Rotheram chats about while whipping up his dish. 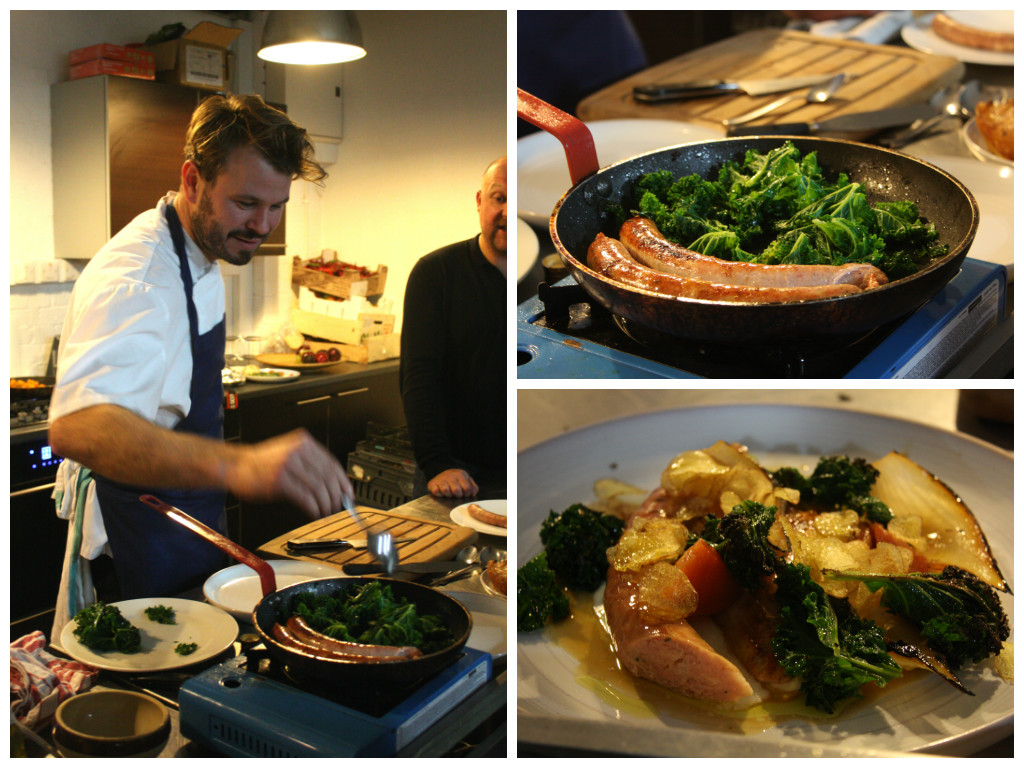 Firstly, the issue of hanging. “I’m don’t mind admitting that I don’t like pheasant to taste too gamey” Rotherham says. “When people get hold of a pheasant they think that they should hang it for ages and ages to develop all these gamey flavours, but if it’s hung too long, then the gaminess of the meat can become overpowering.”

“There’s nothing wrong with eating a pheasant which hasn’t been hung at all” he says. “Three days is good, but don’t hang it for longer than a week. If you hang the bird with its guts in for a couple of days, that’s perfect ” he explains. “Leaving the guts intensifies the gaminess - a short, intense burst is better than hanging it for a long old time.”

Rotherham’s other tips involve game chips: “I cook them for forty minutes in medium temperature oil to get them really crispy.” Bread sauce: “You can never put too much bread sauce on a plate, and even then, people  will ask for seconds.” Slow-cooked onions: “Just put a whole onion in the oven overnight. The next morning, the skin will peel off, and you’ll have the most sweet and beautiful onion, which perfectly holds its shape.” On sourcing pheasants: “Make friends with a pub owner near a shoot. There are always leftover birds which people are keen to get rid of, and you’ll be able to pick them up for next to nothing. If you can, ask for the hens, because they usually have a bit more fat on them.” And finally, on cooking pheasants: “Overcooking pheasant is a common mistake. The meat should still have that lovely pink blush to it.”

We break again, and replenish our plates with cheese and pate and piccalilli  while the final chef, Fifteen Cornwall’s Andy Appleton, starts prepping his dish.

Andy begins by reiterating the theme of the evening - celebrating and respecting pheasants. He explains that it’s important for him to to cook with every part of the bird “out of respect”.

“The legs are the trickiest part. They’re sinewy, and so they need slow-cooking. So at Fifteen Cornwall we often rip the legs off, and then use them for confit or pasta fillings.”

Appleton’s plate stars the beautiful, Sicilian dish - caponata - a medley of cooked herbs and vegetables (see the bottom of the post for the full recipe). It’s the culinary opposite of the brown, cream sauces associated with pheasant dishes of olde. It is fragrant and fresh and flavoursome - squash and chestnuts and tomatoes and thyme and vinegar-soaked raisins. Joy of joys. 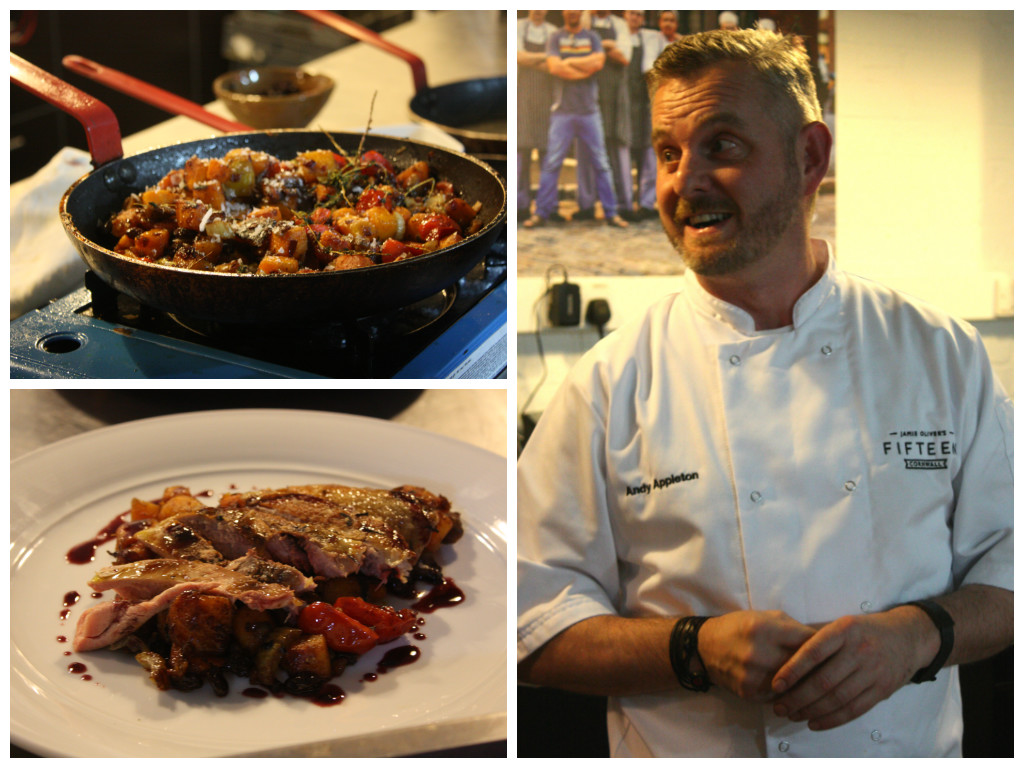 Appleton spoons a generous portion of the caponata in to the centre of the plate, and then arranges slices of roasted pheasant breast on top. In Britain, pheasant is often associated with fusty shoots, stews, mash and stodgy food. The caponata is a reminder of what a big part game plays throughout Europe’s many cuisines. And that chefs shouldn’t be scared to introduce Mediterranean or even North African flavours to game dishes. Appleton explains that the caponata is a versatile dish - and goes brilliantly with venison too.

I’d briefly like to thank the event organiser Merlin for putting on such a great evening, and also for spoiling us with some serious breads, pates, cheeses and far too much Côtes du Rhône.

And finally a huge thank you to the Jamie Team for taking the time to big-up pheasants. I feel inspired, and excited about the season ahead. If you are a veteran cooker of pheasants, then I hope you too take something from the recipes above. And if you’ve never taken on a pheasant, then now’s the time! Hassle your butcher, start approaching people wearing Barbours with a bulging game pocket, befriend country pub owners…sniff out a pheasant and give the old bird a go.

If you’re into game, then you might be interested in reading some of my other posts on: Pheasant Curry, Pheasant Basquaise and The Glorious Twelfth

Click for some more game recipes on the Jamie Oliver site, and also for some seasonal recipes they’ve put together, perfect for this time of year.

1. Heat the oil in a frying pan, and then sauté  the red onion, fennel, dried chilli, celery and chestnuts until they turn a warm, golden colour.
2. Add the cherry tomatoes to the pan, along with the roasted squash, raisins and thyme. Cook for a further five minutes. Season to taste.

Serve with pheasant crown, which has been pan-fried until a golden brown - still blush pink on the inside - and then sliced off the bone and laid on top of the caponata in slices.

« Quick and Easy Kedgeree
Where to throw a Party in London »