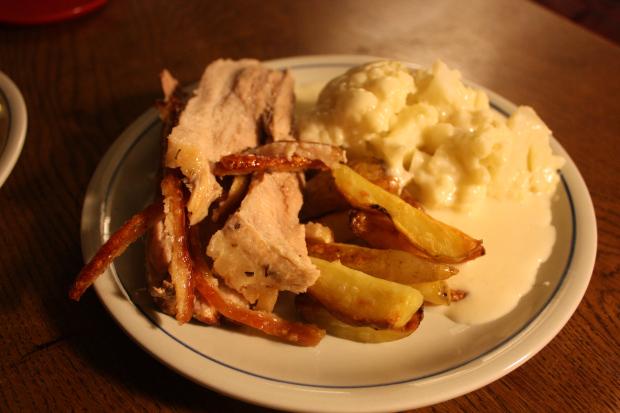 Feasting on Pork in Denmark

“Denmark is literally filled with pigs” a friend told me in the pub a couple of weeks ago, just before I set off on holiday.

“Seriously, you can hardly move for the pigs” he insisted. “Denmark has so many pigs, it supplies the whole of China with pork.”

And so I arrived with porcine thoughts swimming in my mind. I reminisced about a journey I often made from Leicester to Suffolk, where the rolling hills would give way to flat farmland, lined with sties, snuffling sows and their little piggywigs. I wondered what it would look like on a grand scale. How a country as small as Denmark could provide enough pork to feed all of China. How the millions of pigs would move about when Denmark is made up of 406 islands. They’re not renowned swimmers, are they?

But then a funny thing happened. We got there and started driving - and no pigs. We drove a bit further - still no pigs. We crossed The Østbroen Bridge. “Perhaps there’ll be some pigs the other side” I wondered as we pushed west toward Jutland and the North Sea coastline. But not a sausage. 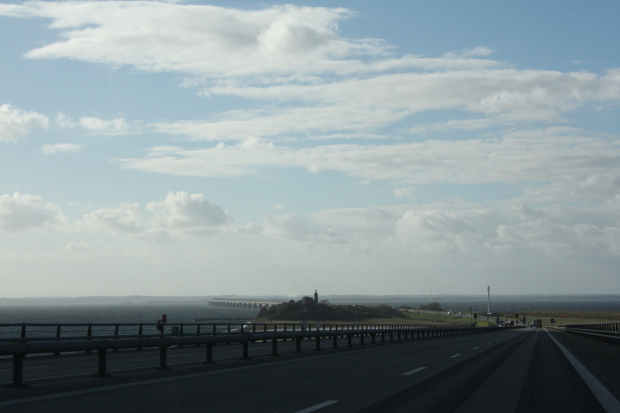 The Østbroen Bridge: Hunting for Pigs

“We have now driven quite far” I texted the aforementioned friend. “And there is not a single pig in sight. Sheep, yes. Cows, plenty. Quite a few horses. But this gobbet you tried to feed us about Denmark supplying pork to China is rubbish.”

“Impossible. You must be in Holland” he replied.

Well, I can assure you that we were not in Holland. And not once during the week did I see a pig. Though oddly there was a lot of Danish bacon in the supermarkets, so they must be kept somewhere. “Battery pigs” Tom suggested - which I thought was a revolting idea. Even worse that battery chickens. But he assured me that pigs liked small dark spaces…”like pigsties”…and he put another pack of bacon in the trolley.

It didn’t really matter though. It’s not like we’d gone to Denmark specifically to eat pork. In fact, for most of the week we stayed in a cottage kindly lent to us by a friend of a friend of a friend. It was near the small fishing town of Rørvig, and I was excited about eating fresh fish. 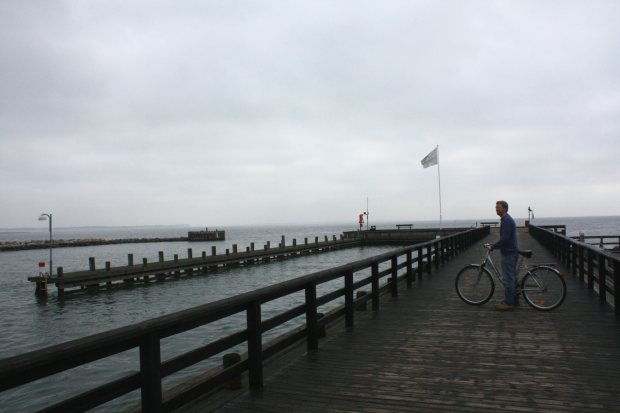 Only it turned out that we had chosen quite a peculiar time of year to visit Denmark - and all the fishermen had gone home. We cycled to the harbour, and stalked round the desolated yard. But not so much as a fish finger. There was movement inside a portacabin, so we knocked on the door, and entered a fog of cigarette smoke. “Hvad vil du?” a voice growled from within the thick smoke cloud.

“We are looking for fish” I said. The fisherman stood up - his head poked up above the cloud of smoke. He wrung his rope-worn fisherman’s hands and plunged them into the deep pockets of his oilskin fisherman’s jacket, chewing on the stem of his fisherman’s pipe. “There are no fish here.” He said.

And so we went to Spar instead. Where, much to Tom’s delight, he found 2.5kg of pork belly for £2.50 - the sort of prices which can, apparently, only be found in a country saturated with pigs. 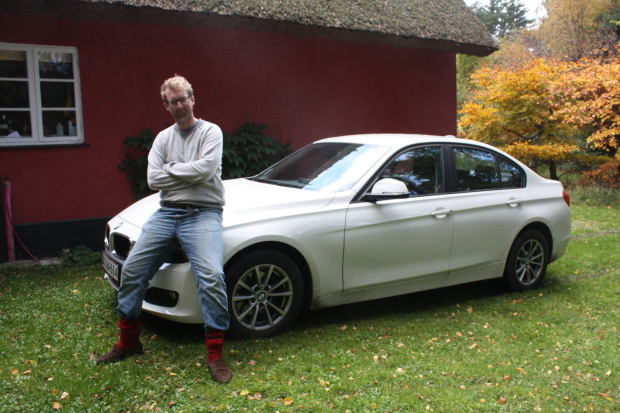 We rubbed salt into the pork belly and then put in a very hot oven for half an hour, and then in quite a low oven for two and a half more hours. It doesn’t make for a very exciting recipe. So I thought I would use this opportunity to do a recipe for cauliflower cheese instead, which was, on this occasion, made to use up an enormous lump of smelly ‘Økologisk Danbo’ cheese which Tom had bought, and which we both agreed would be unfair to take home in our hand luggage.

1. Some people boil the cauliflower. I prefer to roast it. I think it helps it stay a bit more robust, and it stops the cauliflower from seeping out goodness and flavour into the boiling water. So, put the cauliflower florets into a roasting tin. Use your hands to coat in the olive oil, and then put in the oven at 180C for 15 minutes, until the edges are just starting to caramelise and brown. 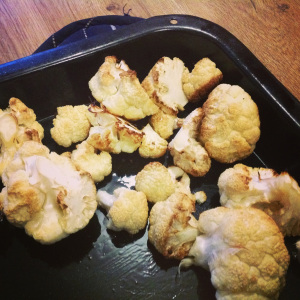 2. First make a roux. Put the butter in a saucepan, and heat until it is just starting to bubble. Add the flour, and then stir it into a sort of thick, spongy paste. Now, leave this to cook for a couple of minutes. This is key - because it cooks the flour a little, and means that…well, it won’t taste floury. Don’t let it burn - don’t even let it brown - ideally, it should turn a dark, straw colour and start to give off lovely nutty, buttery aromas. 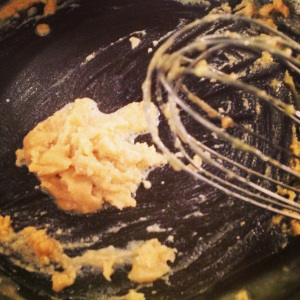 (Nb. If the photographs look like I’ve done it in a frying pan, that’s because I did - but only for the sake of there being more room in a frying pan for photographs. Do not follow my lead. Use a saucepan. The high sides mean that it’s far easier to stir things in a saucepan, which means that the sauce won’t splatter round your kitchen, as it has a little in mine.)

3. The most important thing is to add the milk little by little. The pan should be hot enough that when you pour in the first 25ml, it sizzles, and is absorbed by the flour-butter roux immediately. Each time you add a little more milk, beat it in with a whisk. If it starts to go lumpy, then it could be a sign that you’re adding the milk too quickly, or you’re not whisking thoroughly-enough. Do not fear! You can use elbow grease to beat out the lumps. 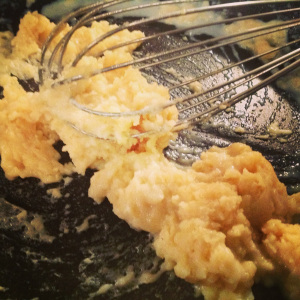 At first, the roux will take on a rather weird, spongy, brain-like consistency. This is good. Add a little more milk now, and it will soon turn thick and creamy. You will still need to add a little more milk after this point for two reasons. Firstly, because the melted cheese thickens the sauce, and secondly because the continued exposure to heat will also thicken it. 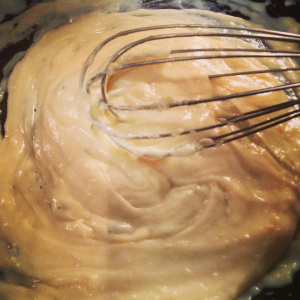 4. Now add the cheese to the pan. It’s a great excuse to use leftovers. In Denmark we used just Danbo. Today, I found a gnarled lump of Chedder, some Shropshire Blue which is so old I don’t even remember buying it, and some mozzarella which gives the cheese sauce a juvenile, stringy texture. Quite enjoyable. Pop it in the warm sauce, and let it melt in. 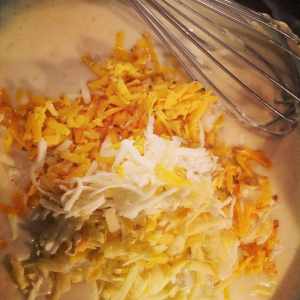 5. Finally, ‘season’ with lemon juice, mustard and pepper. Keep tasting, and adding a little of everything until you’re happy. Do not add salt. Cheese is very salty, so the sauce shouldn’t really need any more. Put the roasted cauliflower into a nice stoneware/pyrex dish (if you have one - improvise if not!) cover with the cheese sauce, and return to the oven for 6-8 more minutes. 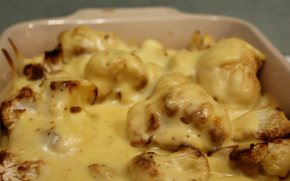