Mussel Bordelaise: A Tragedy and a Triumph 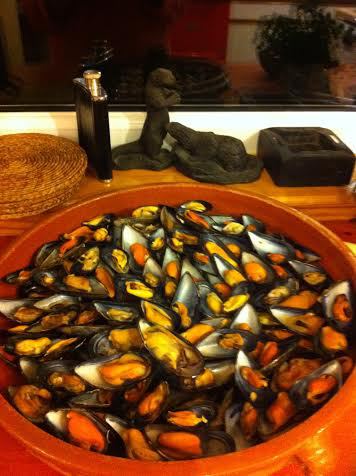 My blog is a pretty honest account of ‘The Food I Eat’. I’m afraid I don’t cook anything special for you all , I simply use this space to chronicle some of the best bits that go on in my kitchen.

It stops recipes scrawled on scraps of paper from being thrown away. And it helps me remember things. Why is it, I wonder, that most of the time I can barely remember my own name - but show me a photograph of a plate of food, and I can remember exactly where I bought the ingredients, who I shared it with, what we chatted about while we ate it…

I have a confession to make though. There was one dish last year which wasn’t blogged. Yes - while most other bloggers are writing up their ‘highlights of 2013′ - I’m just about ready to admit to my bête noire. A meal which didn’t make it onto the blog for a rather terrible reason.

I’m pretty sure that it was back in April last year. I know that because Yum Bun on Old Street roundabout had recently opened. I fancied some mussels for supper, so I took a detour on my way back from work, past the Waitrose on Holloway Road, and bought 500g for £2.99. They’re really quite economical, mussels.

I crushed some garlic, diced some shallots, poured some white wine and slosh of cream into a pan - and then added the mussels. But the excitement and anticipation meant that I took them off the stove too early. Their shells weren’t quite open. The molluscs were still wet and snot-like.

“I hope this isn’t going to make me ill” said my flatmate, tentatively cracking open a shell - while reminding me that he was off on a business trip to Paris the following day.

“They’ll be fine” I assured him - using the logic that if an oyster can be eaten raw, then surely a mussel can. But suddenly losing my bottle, I chucked the mussels back into the pan, and gave them another blast of heat, until the shells had popped wide open, and then meat was orange and cooked.

The following day, I took another detour on my way back from work - this time to Yum Buns. With one of Lisa Meyer’s pork-filled steamed buns in my hand I started to walk back toward Bethnal Green. But by the time I’d reached the flat, sweat had started to bead on my forehead. I began to feel sick. Not a headachey, sore throat sort of sick, but a guttural, stand-alone wave of nausea.

The bun reappeared. But I knew that it was the mussels - not the bun - which my body was expelling. “It’s just a virus” I reassured myself. “Some sort of 24 hour bug”. But I gave my flatmate a call, just in case. He didn’t sound good. His Paris meeting hadn’t gone well. Half way through, he’d had to excuse himself from the boardroom. As he heaved in the toilet, he flung his tie over his shoulder. But not fast enough. It intercepted a stream of sick - and so the rest of the day’s meetings were attended with top button undone, and a green-grey pallor.

I feared that this might have be the end of mussels for me. But oddly, it’s Chinese steam buns which I just can’t stomach now.

Although I’ve eaten them since, I haven’t cooked mussels again since that fateful day. Extensive research informed me that, (although not ideal), mussels can be eaten underdone. It must have been a bad batch. But I’d done the culinary equivalent of falling off a horse, and lain on the ground in the foetal position. And everyone will tell you that when you fall off a horse, you absolutely must get back on. 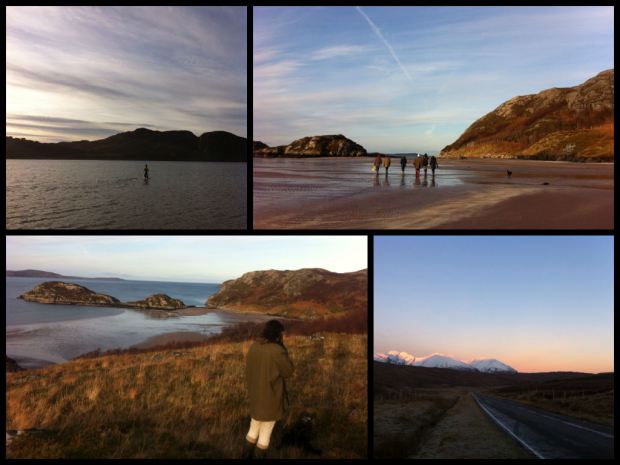 So what better occasion than visiting my friend Katie over new year? I should start with a brief introduction. Katie’s parents decided, in their mid-twenties, to start farming fish in Little Loch Broom, which is about as a remote a part of Scotland as can be. They live in Ardessie, which Wikipedia describes as “a small hamlet” - but I think that’s overegging things. There used to be a shop a few miles away - but it closed. Now newspapers are deposited in a waterproof box in the bus stop, where the odd Ardessie resident may wait to hitch a ride into Inverness on one of the two buses which pass each week.

During the few hours of sunlight over winter, Katie’s mum would pile her three young children in the car, and drove them to nearby beaches to chase the sunshine. Katie and her siblings would walk round the beach in a sort of sun dance with the palms of their hands raised in the air. “It meant that we could absorb as much vitamin D as possible” Katie explains. Obviously. On the long summer days of homeschooling, they would finish work and then yomp around the surrounding mountains and play outside: “we rolled about in the grass, and then counted how many ticks we’d picked up.” A blissful childhood. 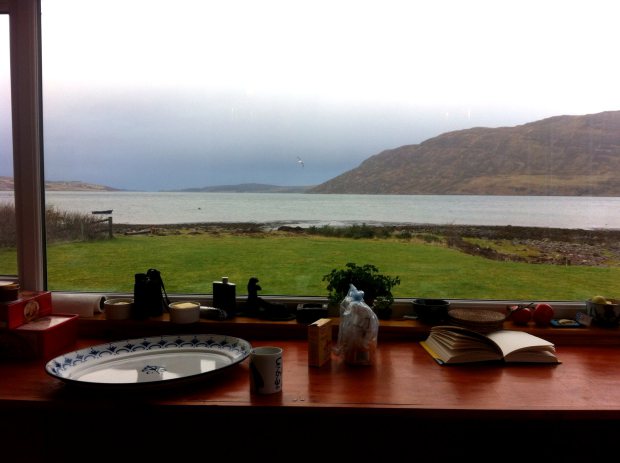 Ardessie: View from the Kitchen Window

Katie’s Dad, Johnie, is a man of legend. He hasn’t shaved since the age of eighteen, and once had a pet owl called Wol. His eats his breakfast with one hand, holding binoculars to his face with the other, so he can watch the otter eating his outside. He is a brilliant and resourceful cook - and the perfect person to help me fall back in love with mussels.

On a night with lots of people round for supper, Johnie picked a bucketful of mussels off the side of a fish cage, and announced that we were all going to help make Mussel Bordelaise - a dish which is laborious for a single cook to prepare, but easy with lots of hands to help. Kindly, he has let me chronicle the recipe below.

On a small side note, I have since done some research into Bordelaise sauce. As the name suggests, it is a rich French sauce, which is traditionally made with Bordeaux wine, shallots and bone marrow. This is not what we served with the mussels, which makes the name of the dish confusing for the connoisseur and painful for the pedant. But it is how Johnie introduced the dish, so it is how I shall title it.

1. Firstly, JUST cook the mussels, so the shells are only starting to open. Johnie did this by putting them in a big pan - no water - saying that the water inside the mussels meant that they steamed in their own juices. He conceded that if you’re nervous, then you can add a splash of water to the pan. Cook on a hob for 2-3 minutes, making sure that you stir or shake the mussels a couple of times.

2. Put the pan of just-cooked mussels in the centre of the table, with a lot of helpers at hand to do the laborious next stage. Crack open each mussel, discard the uglier half of the shell, and arrange the mussel in the other half of the shell. Lay them out in a big, flat dish - a little how you’d present oysters. 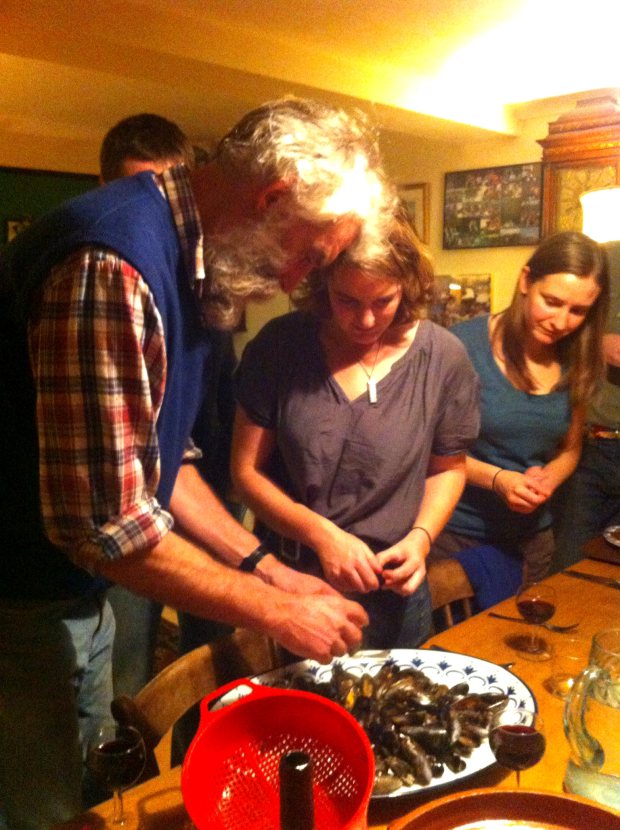 3. Meanwhile, make the “Bordelaise” sauce: start cooking the bacon in a pan. Add the onion and celery, and let it cook in the rendered bacon fat. Cook the garlic, and then add the tomatoes, breadcrumbs, thyme, sugar, and Lea and Perrins.

4. Pour the sauce over the mussels. Cook it under a hot grill. This finishes off the part-cooked mussels, and it fuses together the sauce so it has the kind of consistency you’d associate with a pizza topping. But far tastier. 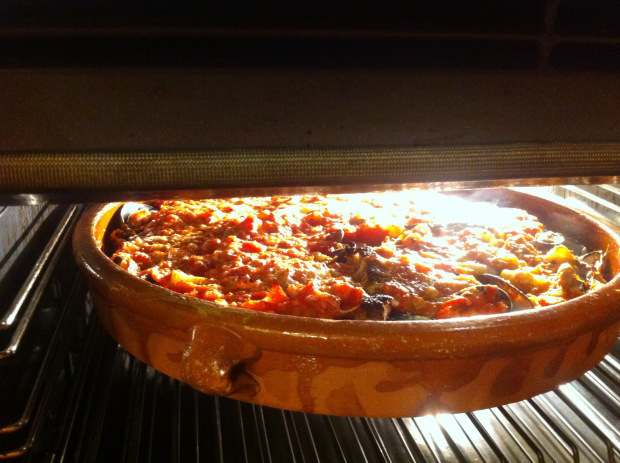 5. Garnish with parsley and serve. 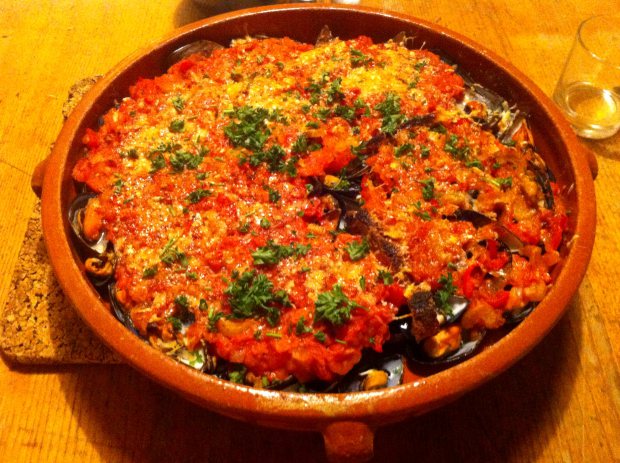 4 thoughts on “Mussel Bordelaise: A Tragedy and a Triumph”