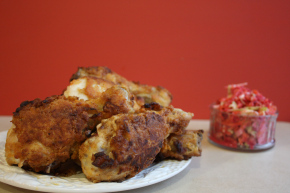 A few years ago, I was at my parents’ house in Leicester when a friend - quite heroically - decided to drive down from Doncaster. After taking on the M1, she arrived mid-morning and asked if she could have some breakfast.

I poured some milk into her tea, and it congealed into little globules spinning in the mug of murky water.

I turned my back to her, and quickly picked the green fluffy bits from a slice of bread, and bunged it in the toaster. Using a teaspoon, I skimmed the furry layer off a jar of blackberry & apple jam and spread it on the toast. Finally, I shook some muesli into a bowl and spooned some tangy, sharp yoghurt on top.

Tears of laughter were rolling down her face by the time everything was on the table. Because I think she lived in the sort of house where things past their best before date were thrown. Not us. My mum rarely pays attention to best before dates. Hell, she rarely pays attention to a bit of mould if it’s dairy, bread or jam-based. (As a disclaimer, I should point out that she WOULD chuck mouldy meat).

The thing is that I think I might have accidentally acquired the taste for off food. I’d take a sharp Greek yoghurt over thick ‘n creamy any day. I love a cheese that’s crawling off a plate. Sauerkraut, sourdough, pickles, miso and kimchi…oh, dear old kimchi.

In Ireland, buttermilk was most often used to make soda bread, but now it’s hitting menus round the city in the form of ‘Deep South-style’ buttermilk fried chicken. The acidic-dairy buttermilk marinade helps tenderise the chicken, and it also works as an immediate batter. So if you’re lucky enough to stumble across a carton of buttermilk, then do give the recipe below a try. It’s like KFC at home. Only better, because you will have made it yourself, and if you eat in YOUR home, and not The Colonel’s, then it doesn’t exactly count as junk food, right? Finger lickin’ good…

Buttermilk - a thick, yoghurt like consistency, with a sharp, tangy taste

1. Pour the buttermilk into a plastic container, and submerge the chicken drumsticks. Leave to marinade for at least 2 hours - ideally overnight.
2. Preheat the oven to 180C
3. Put the flour, paprika and salt into a plastic bag - and shake.
4. Heat the vegetable oil in a pan. You’ll know it’s the right temperature when you drop a bit of bread in it, and it fizzes about and turns golden.
5. One by one, take the chicken drumsticks out of the buttermilk marinade, put in the bag of flour and shake about until fully coated.
6. In batches, put the chicken drumstick in the pan of oil for 30 seconds, or until the outside is crispy and golden. Then turn it over and do the other side.
7. Put the chicken drumsticks in the oven at 180C for 25 minutes - and then serve, with a homemade ‘slaw, or something else which makes you feel a little guilty about a weeknight, homemade KFC…

One thought on “Buttermilk Fried Chicken - AKA Homemade KFC”